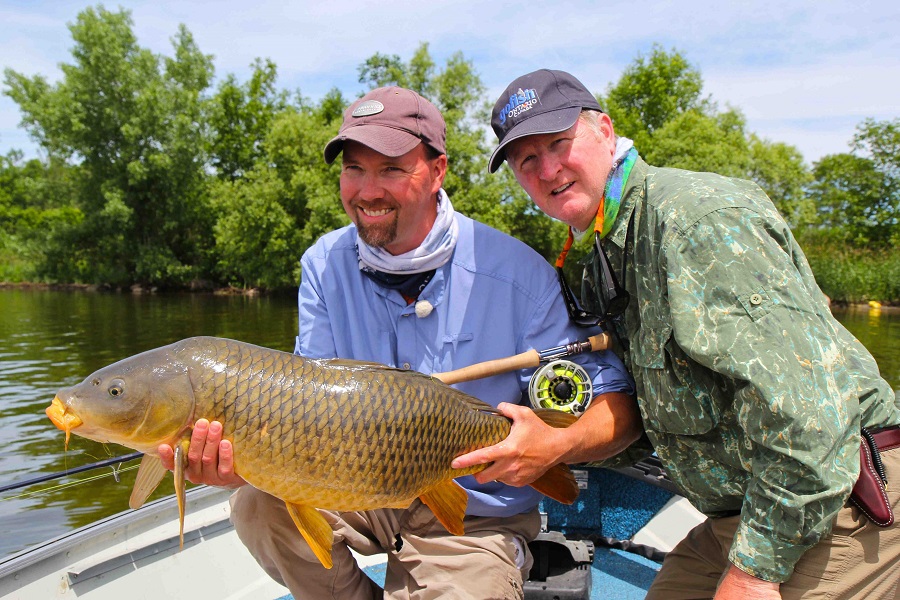 The water of the shallow cove was clear and unruffled, shimmering in the afternoon sunshine. It was unusually hot for early May.  I was standing in the shallows of a wide bay, camouflaged among the dry stalks of last year’s cattails, absolutely motionless.  Across the bay something large sloshed on the surface.  Not yet—too far away.

Then—a subtle bulging of the water and a trembling of the cattails to my right. And I saw them—three huge blue-grey shadows, fat as footballs, yet sleek, exuding power. Slowly, they came closer, foraging casually along the outside edge of the cattails. I could make out the tubercles of their nostrils, the occasional flash of orange-pink lips as one paused to pick up something from the bottom, and the hint of bronze scales beneath the dusky patina of their broad backs.

A gentle push on the rod, and the line curled out towards the fish—now less than 15 feet away. The weighted nymph dropped a foot in front of the leader, barely rippling the water.  By the time the fish reached it, the nymph had almost touched the bottom.  There was no hesitation: the mouth opened, inhaled, and the nymph was gone.

Like me, carp are immigrants. They’ve been on the move from their homeland in Asia for centuries, arriving in Europe in the Middle Ages in the backpacks of monastic aquaculturalists, destined for ecclesiastical stewponds. They arrived in North America about a century before I did, and, today, the waters are swarming with them. 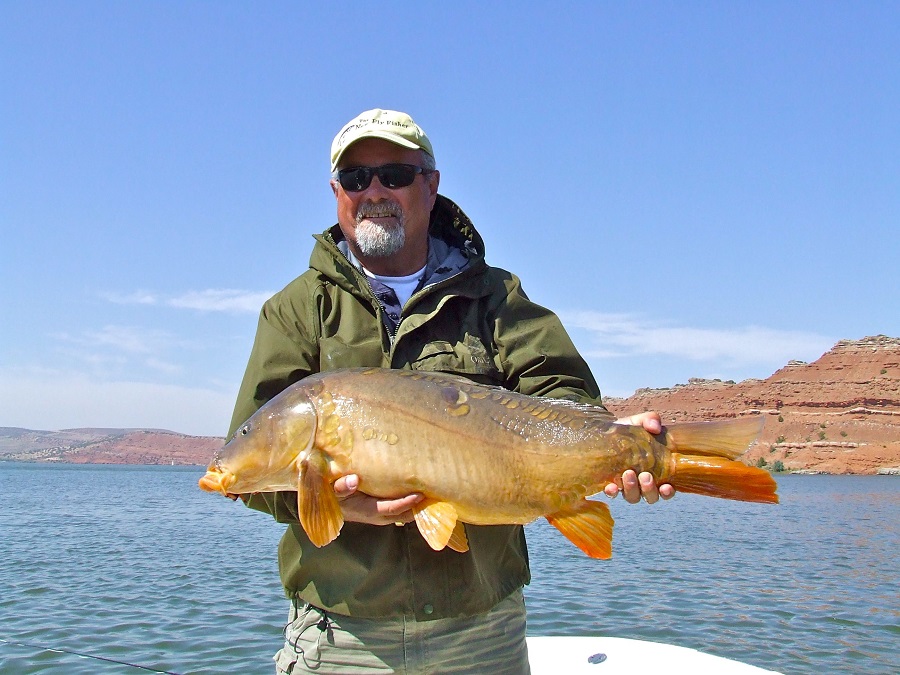 Bill with a Wyoming carp

In Canada, carp are found from Quebec to the Prairies. Many anglers curse them; few fish for them; even fewer fly fish for them. But those of who do, have come to delight in the challenge of seducing them into taking a fly and in the terrifying power of their runs.

You can catch carp on flies wherever they swim—I even hooked one on a Woolly Bugger when I was fishing for smallmouth in the plunge pool of one of the dams on Ontario’s Trent River. They love warm water and are most active in the summer, but they can be taken from May to September. Where I live in Eastern Ontario, the Bay of Quinte offers superb carp fly fishing. This long, shallow stretch of water is perfect habitat for them. Fish over 20 pounds are common and there are specimens over 40. Our biggest on the fly weighed in at 38½ pounds. 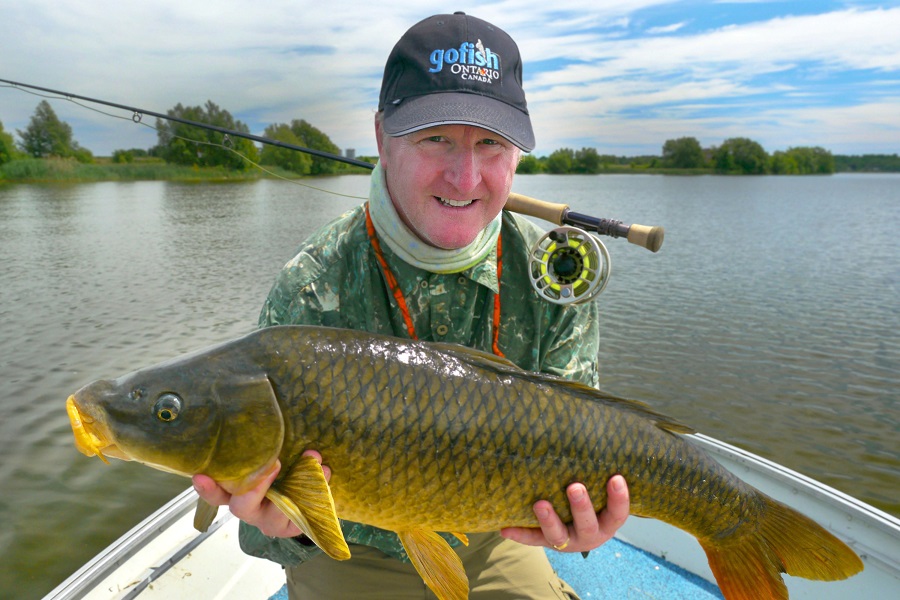 Colin with a carp from the Bay of Quinte, Ontario

My favourite time to fly fish for them is in the spring, when they move into shallow water prior to spawning. The water warms up more quickly in the shallows, and the fish bask there, soaking up the warmth, feeding on invertebrates in the newly sprouting aquatic vegetation. In these conditions they’re particularly partial to an artificial nymph placed strategically in front of them.

This is no delicate business. Leave your trout gear at home.  What you need is a heavy-duty #9 or #10 weight rod, at least nine feet long, with a fighting butt.  I use a ten-foot rod with a WF9 floating line—the same rod I use for chinooks.  The extra length makes it easier to maneuver the line among the cattails without fouling it.  It’s perfect for making the short flip casts, which are what most situations demand.  For you have to be close to the fish in order to see them take.  Carp are so quick to spit out an artificial fly, that the usual method of watching for the leader to twitch is useless.  Most of the time the leader never even moves when a fish takes.

The reel should be big enough to take not only the big line, but also at least a hundred yards of backing, which should be top quality dacron and at least 30lbs test. A good disc drag is an asset but not strictly necessary, so long as the reel has an exposed, flanged rim for manual braking with fingers and palm. Good quality, large arbor, salt-water models fit the bill nicely, as they won’t seize up when these powerful fish take off on their characteristic long, blistering runs.

Choosing an appropriate leader presents something of a dilemma. For such powerful fish, a strong tippet is essential.  Yet, at the same time, it has to be fine enough to allow a natural presentation of small flies.  If you opt primarily for strength, you lose out on presentation.  If you opt for presentation, you lose out on strength.  Luckily, the latest generation of leader material designed specifically for fly fishing.  For my tippet (the end of the leader to which you attach the fly), I use an Australian product which offers 3X (0.008” diameter) with a breaking strain of over eight pounds and 2X (0.010” diameter) of over ten pounds.  In relatively snag free water the 3X is fine, but where fish have to be turned or stopped sharply, 2X or even 1X should be used, although the latter will restrict you to flies of #8 and bigger.  In all cases, whatever size you use, a Duncan Loop knot will allow you fly to swing free, enhancing the naturalness of the presentation. 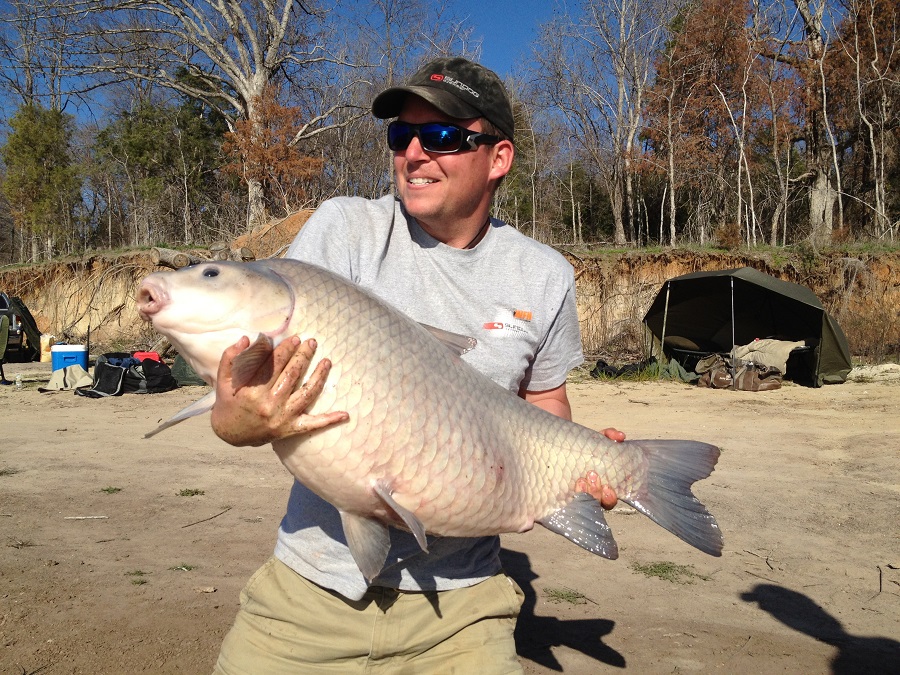 I’ve never known carp become as selective in trout in their feeding.  However, the best flies are those which actually imitate the things which carp are used to feeding on.  In some heavily fished waters, where anglers regularly chum with corn, bread, or pellets, “flies” which imitate these can be very successful, especially if they’re impregnated with the appropriate scents and juices—although some purist fly fishers would shudder at this practice.  But where I fish, the carp are not used to finding food which humans throw in the water.  This means that we use flies which imitate the invertebrates and crustaceans which carp habitually forage for.  Most impressionistic nymphs in sizes #12 to #6 will work well.  Scud, shrimp, crayfish, and worm patterns are also good.  All should be weighted. Crayfish patterns will allow you to fish a larger fly and a heavier leader.  But, in most cases, presentation is far more important than pattern.

Most anglers are familiar with the popular slogan “Think like a fish!”.  However, when you flyfish for carp you should think like a heron.  Stealth, stillness, and positioning yourself where the fish will come to you is what it’s all about.

First, stalk the margins of the water, looking for signs of carp in the shallows.  This isn’t too hard in the spring.  Even well before the actual spawning, there are always a few particularly randy individuals (most likely male) which will be sloshing around in the shallows.  Look for these.  For where there’s a couple there will be more.  Watch the water for a while, noting the patterns of movement.  You’ll find carp patrolling in pods just off shore.  Once you’ve established the pattern, wade out slowly, sneakily—if there are cattails or other potential cover, hide there, positioning yourself close enough to passing fish that you’ll be able to see them take your fly beneath the surface.  Then, just like a heron, freeze and wait.

When you see a pod of fish approaching, wait until they are in easy casting range and, as unobtrusively as you can, flip your fly about a foot in front of them, so that it is just reaching the bottom as they approach.  If they’re in a feeding mood (not all are), and if you haven’t spooked them, you’ll see one engulf your fly.  At this point, set the hook immediately.  If you don’t you’ll be too late, as carp are quick detect forgeries and spit them out.

Once you’ve done this, hang on and watch your fingers don’t get in the way of the reel handle.  Unless the carp is heading for obvious snags, ease off and let it run (this is what all the extra backing is for).  It won’t run forever.  Just keep a gentle pressure on and it will eventually turn.  Then be prepared to pull in line fast—a favourite carp tactic is to head straight back at you.  Whatever you do, never let the line go slack.  It’s also a good idea to have a big landing net with you, and also a fishing buddy, so that you net each other’s fish.

There are much bigger carp out there than the 38½ pounder caught back in 1998. It’s presently the largest rod-caught carp registered in Ontario, but I doubt if it will hold first place for long.  I’ve heard tales of even larger specimens in Manitoba’s Red River, and I know that a number of fly fishers out there target them. However, I suspect that our Bay of Quinte fish will hang in there for some time as the biggest fly caught specimen in Ontario—a fine tribute to fly fishing, and to this sadly underrated and all to frequently maligned immigrant.