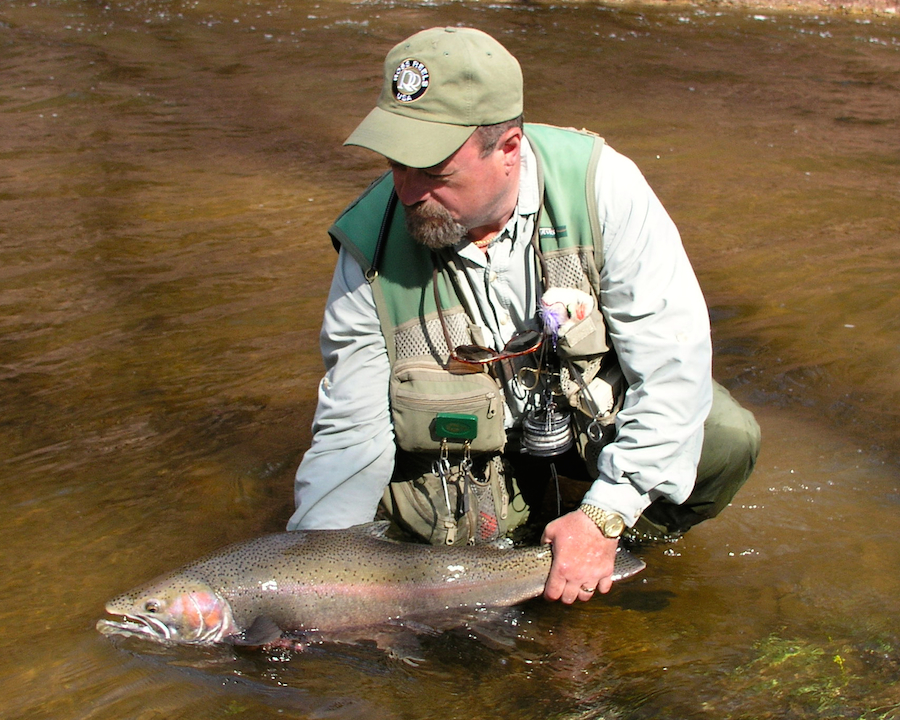 The streams at the eastern end of Lake Ontario which feature steelhead runs are mainly small. There are a few exceptions, such as the Salmon River, on the New York side, but almost all the bigger rivers are too warm in summer to support the progeny of the occasional disoriented steelhead which sometimes wander into them.

This means that, unless they’re prepared to make extended trips, local flyfishers have to focus on small streams—most less than 30 feet wide. However, most of us who fish them don’t have much of a problem with the situation, as fishing for steelhead in small streams has its own special magic—a magic that fly fishers living close to the larger rivers can also share (provided they can tear themselves away from the big water), as there are scores of small streams with steelhead runs along the US and Canadian shores of all five of the Great Lakes. 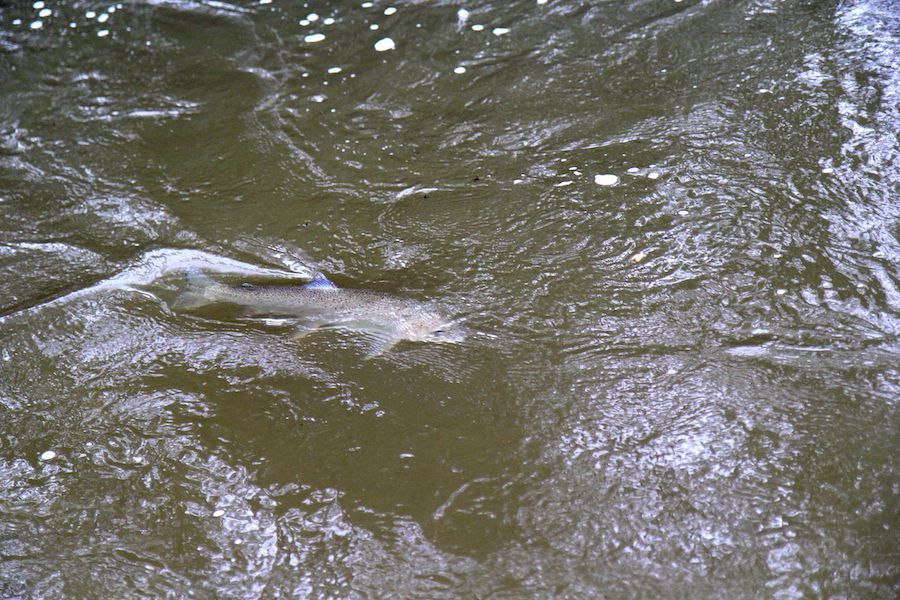 While the major steelhead run doesn’t occur until spring just prior to spawning, a good number of fish begin to congregate around the mouths of streams in early fall. Unlike the spring when there are usually consistently strong flows from the melting snow-pack, flows in the fall are usually erratic, depending on rainfall. As steelhead are very sensitive to rain-induced water flow, they will stage in the lake until the first good freshet, when they’ll enter the lower stretches, moving in and out as the water flow fluctuates. In unusually warm, dry falls, they’ll hang out in the lake just off the stream mouth, waiting until there’s finally a decent rain. However, in unusually wet falls, they’ll stay and even move higher upstream. Some fish will actually over-winter in the stream, holding in the deeper pools, where they can be fished for right through until spring as long as the water is ice-free. In fact, a few hardy souls prefer fishing at this time, as they’ll have the stream largely to themselves.

In the fall, steelhead hold mainly in pools and slower, deep runs, rather than in the faster runs and pocket water which they favour in the spring. Look for them in the tails of pools and wherever there is cover, such as undercut banks, boulders, and deadfalls, where they will intercept coho and Chinook eggs drifting downstream. 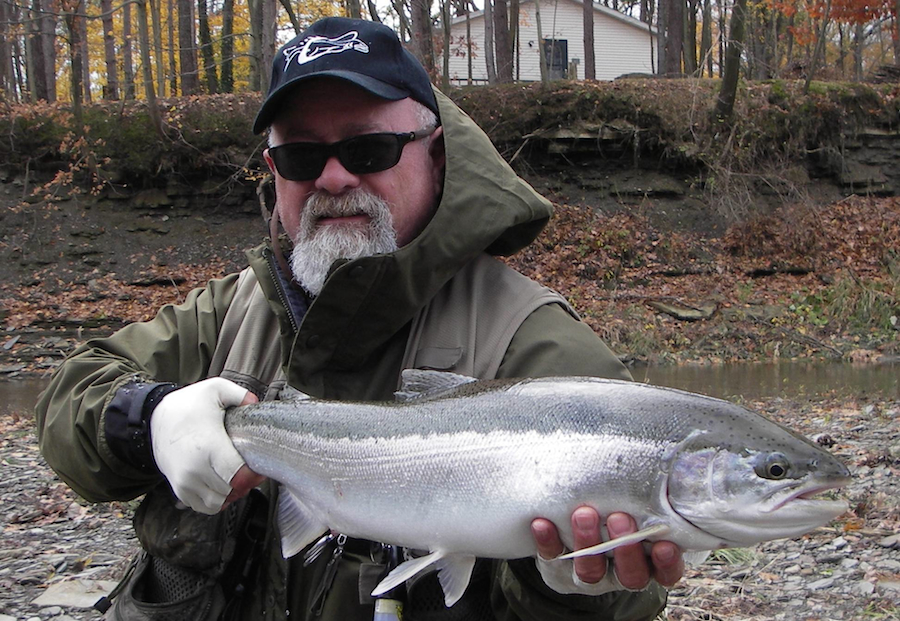 As small stream steelhead can be spooky, especially if the water is low, an upstream approach is preferable. This is sight fishing at its best. Taking care to avoid any sudden, noisy movement, work upstream, spotting fish, being super-sneaky, keeping a low profile and using every bit of available cover to get as close as possible to a spotted fish without spooking it.

Always keeping downstream of the fish, tie on a natural pattern, such as an egg fly, nymph or Michigan Wiggler, and cast ahead of it, with the line at an angle so that it doesn’t spook it. How far ahead you cast will be determined by how deep in the water the fish is holding—the deeper the fish, the farther upstream the cast, so that the fly will be trundling close to the bottom as it reaches the fish. It’s not necessary to have the fly directly ahead of the fish, as the fish will usually move laterally to intercept it. On small streams you’ll experience the thrill of seeing the fish take. Above all, avoid slack line—keep in close touch with the fly without interfering with the dead drift. Control is the key. 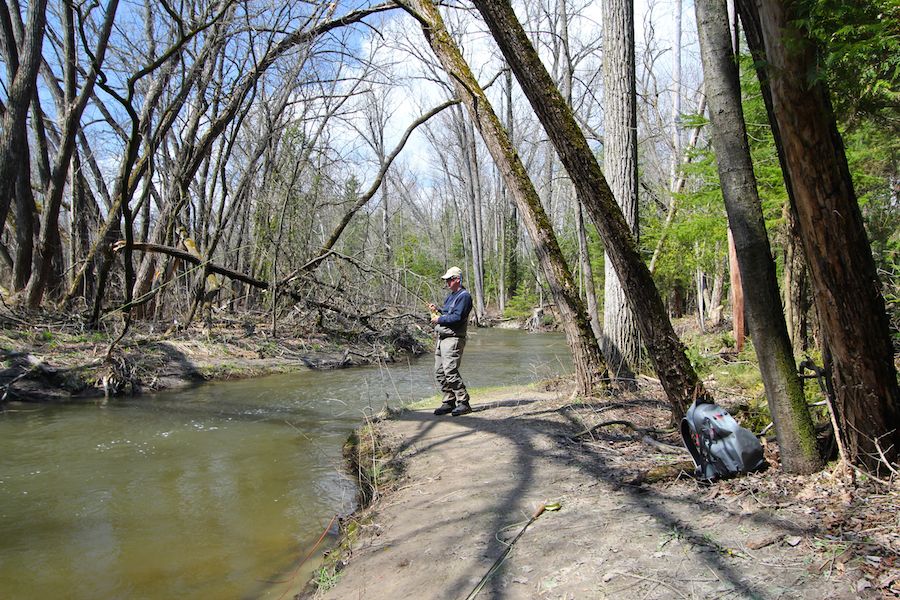 Sometimes, especially on heavily-bushed streams, it’s impossible to approach a spotted fish from downstream. Approaching a fish from upstream calls for even more stealth than approaching one from downstream, as it’s much easier for the fish to see you. Consequently, it’s best to position yourself as far away from it as possible and use a long line.

Swinging an attractor pattern (such as Woolly Buggers, traditional streamers, or even West Coast streamers and Atlantic Salmon flies) is the best tactic. Cast across the current and, keeping as straight a line as possible, let the fly swing across the current. In slower water, it helps to give the fly a bit of movement. Always let it dangle directly downstream of you for a few moments at the end of the drift. The presentation should be very gentle, especially when the water is clear and low—avoid splashing the line down on the water when casting or ripping it off the water at the end of the cast.

Sometimes you’ll have to make multiple drifts to a single fish to induce it to take, although fish in a group, which tend to be more aggressive and competitive, will take more readily. Most takes are under water. Sometimes you’ll see a swirl, but mostly, you’ll feel the take, especially if you’re fishing blind to a likely lie rather than to a spotted fish. 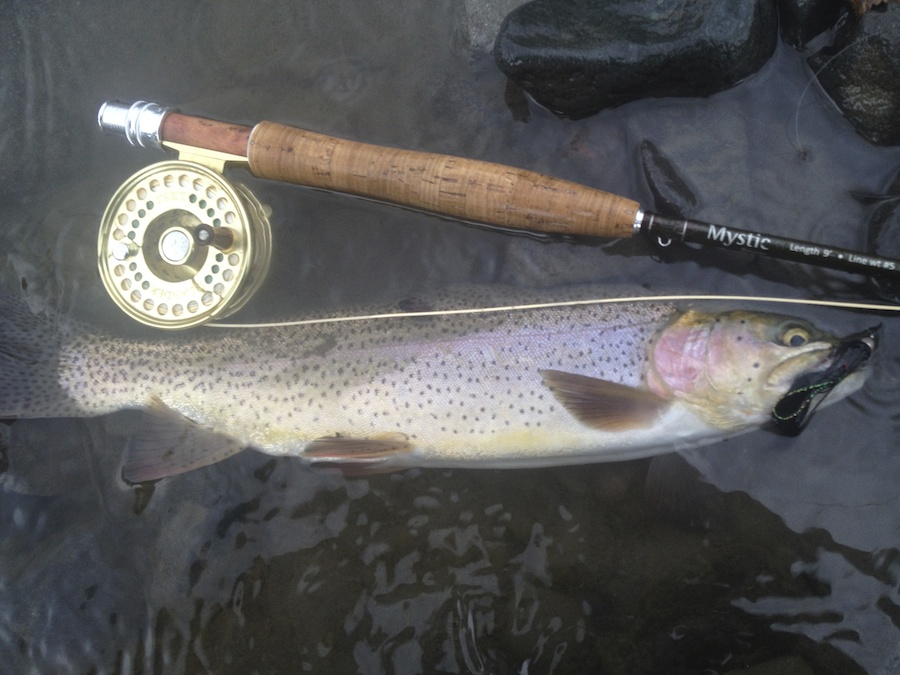 The standard outfit is 7wt to 9wt, with a 7½ to 9 foot rod and an intermediate WF line. There’s really no need for backing, for, if a fish manages to rip off all your line on a desperate downstream run, you’re certain to lose it.The leader should be short (5 to 6 feet) with a tippet of between 6 and 8 pound test, preferably fluorocarbon. It’s best to use a single fly, as droppers can be an impediment on a small stream, especially if it’s bushy and overhung with tree branches.

Great Lakes steelhead are more aggressive in the fall than in the spring. Sometimes they’ll run upstream when hooked, but usually, they’ll head downstream. If there’s room to follow them, do so. It’s frequently hard to do this on the heavily-bushed streams of the Lower Great Lakes, but on the rockier, more open streams of the upper lakes it’s usually much easier. However, wherever you are, it’s best to keep out of the water as much as possible, as the disturbance will spook other fish. Try to prevent long runs by getting a hooked fish on the reel, playing it hard, and bringing it hand as soon as possible. 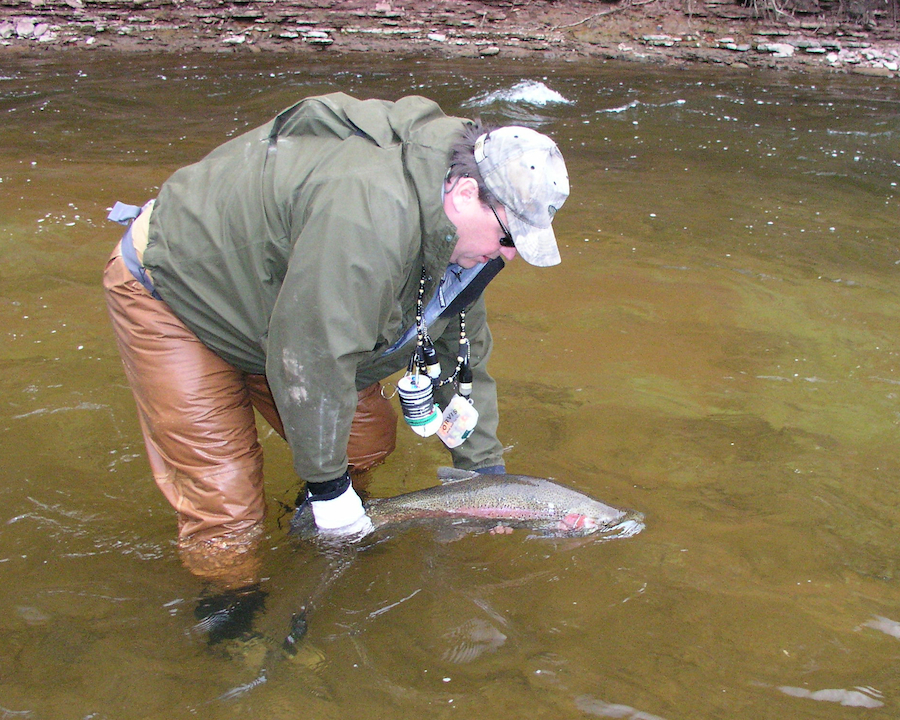 In October and November, fly fishers targeting steelhead on the Lower Great Lakes will often encounter lake-run brown trout. These can be targeted using the same gear and tactics used for steelhead. They tend to run mainly at night, but can be taken during the day, especially if it’s overcast. Unlike steelhead, which usually just take drifting eggs, they can frequently be found foraging in the salmon redds. Unlike steelhead, browns spawn in the fall and will usually have left the stream by the end of November, especially if stream flows are low.

Closed seasons vary greatly among the US states and Canadian provinces. In most cases, streams are open for fishing throughout the fall, but in a few, sections of streams may be closed. Consequently, it’s best to check local regulations prior to hitting the water.