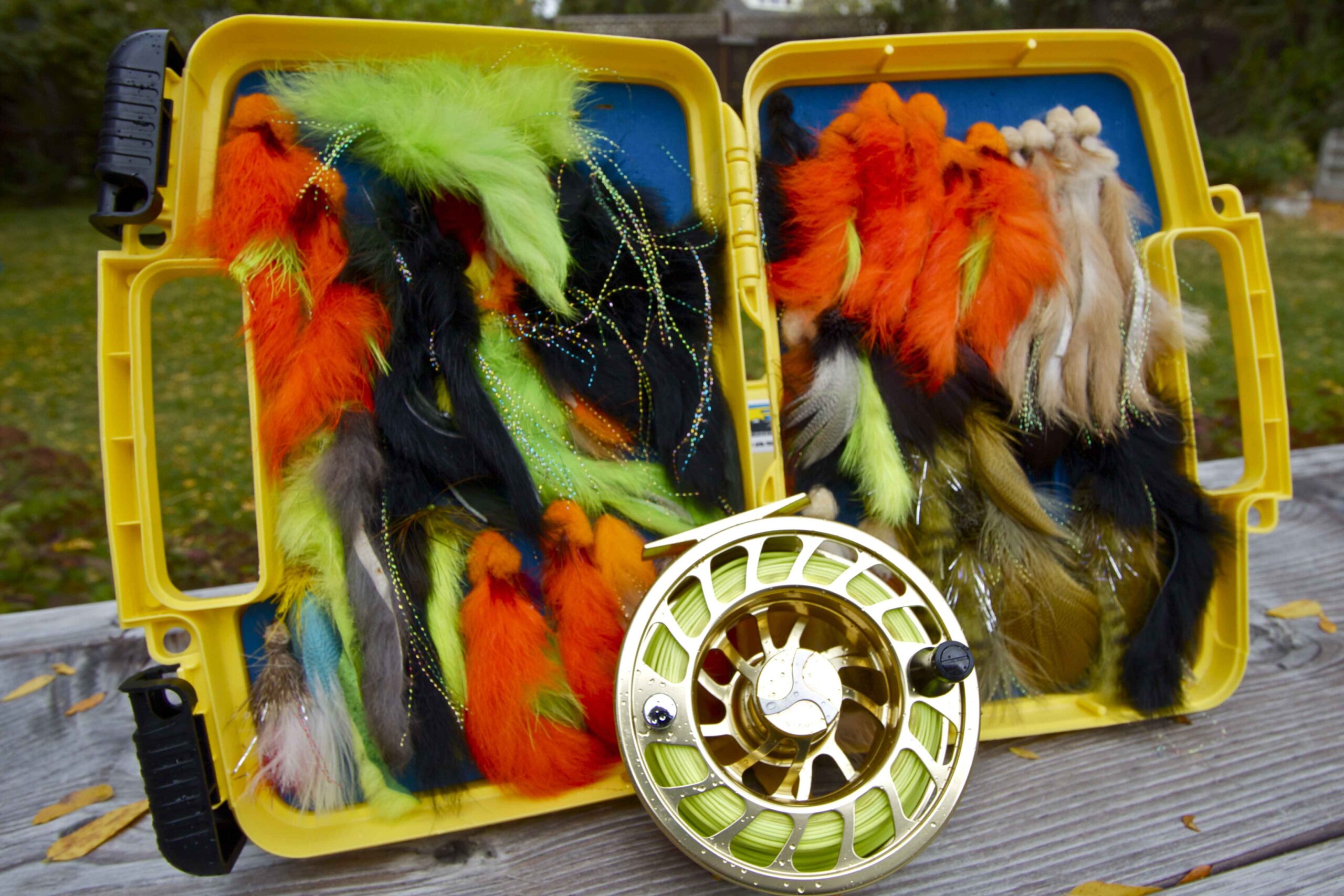 In 2000, when I was taping the first season of The New Fly Fisher, I travelled to Michigan to do a show with Bob Linsenman and Kelly Galloup, whose recent book, Modern Streamers for Trophy Trout, had rocked the fly fishing community, revolutionizing how anglers approached streamer fishing. I had the good fortune to spend two days with these outstanding fly fishers on the upper Manistee River—an experience which absolutely changed the way I used streamers. The hands-on instruction I received from Bob and Kelly on the techniques described in their book has since enabled me to consistently catch big trout, including some of the biggest of my life. But, best of all, I also discovered that streamer fly fishing could be as visually exciting as dry fly fishing!

Trout Behavior
One of the most important things Bob and Kelly taught me was the fundamentals of big trout behavior. Their research indicated that trout make a major transition in the food sources they target when they reach the 13-15” mark. At this point, as insects are no longer a sufficient source of nourishment for their growing bodies, they begin to focus on larger prey, such as minnows, sculpins, darters, and even they young of their own species. As they grow they no longer need to rely on feeding lanes to deliver invertebrates and other small morsels to them. By the time a trout has reached 16”, it has become one of the dominant or near-dominant fish in its ecosystem. They are now full-time hunters. Sure, they will still take the best lie in a feeding lane and gulp down emergers. But, generally, these big trout are looking for big meals. They want to expend the minimum amount of energy to obtain the maximum amount of nourishment. Therefore, a large trout, which is the alpha-predator in its system, will essentially go wherever it wishes to hunt, kill, and rest. Bob and Kelly showed me how to use the streamers to exploit some nature and behavior of these big trout. There are three key behavioral factors in the equation: aggression, territorial response, and hunger.

Aggression
The aggressive actions of big trout are as instinctive as they are for other predators, such as lions. For instance, if someone flees from a lion, there is a good chance he will fire the synapse which causes the beast to hunt even if it is not hungry—it is totally instinctive.

The same applies to trophy-sized trout. That is why when using streamers you should smack the fly down noisily on the water, then use a retrieve which imparts an action of flight, basically imitating a small trout or other prey that has made a mistake by going into the lair of an aggressive, 25” predator. The small trout knows it has made a deadly mistake and will flee for its life. The big trout may or may not be hungry, but the small trout has activated the big trout’s instinctive reaction to attack. Bob and Kelly best sum this up as follows:

Your fly should mimic this movement. The aggressive nature of the large fish asserts itself, the territorial-defense synapse fires, a charge and most often, a punishing grab, follow. The fish cannot resist this critical, instinctive reaction.”
Modern Streamers for Trophy Trout, p.40. 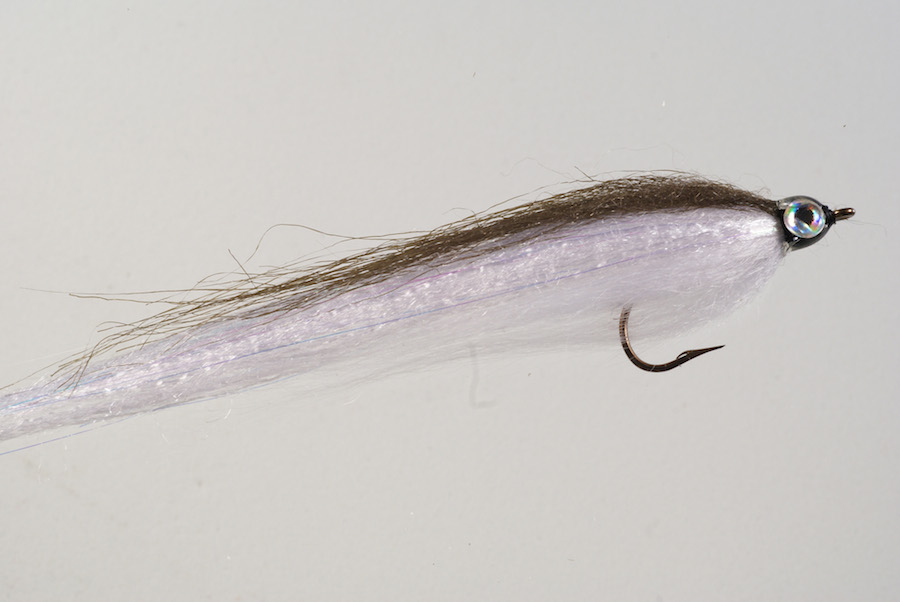 Territorial Response
Big trout are very territorial, with respect to with other trout as well as other species. They energetically protect the places where they live and hunt. Often these trophy trout will strike a smaller trout which encroach on their territories, not with the intention of eating it, but to assert their territorial ownership—in the same way that a female grizzly bear with cubs will attack and swat around someone who encroaches into her zone. The mother doesn’t want to eat the intruder, she just wants to punish him for coming into her territory. Big trout do that same. Again, a big streamer splatted near it and retrieved as if it’s trying to flee, triggers the territorial response, as it considers it to be small fish which is threatening its space. As anglers, we need to exploit this behavior.

Hunger
This is the best of all worlds. If you cast a big streamer into a trophy-sized trout’s lair, make it look as if it’s fleeing and that the pattern is the right size, shape and color to imitate a bait fish. This makes it all comes together. The odds are that that big trout is going to eat. Here’s how Bo and Kelly put it:

Kill or be killed and defend what is yours…Predators are specifically designed to kill the weak and injured. Understand these character traits of a dominant, trophy trout, and you can tap into its dark side and make it respond.
Modern Streamers for Trophy Trout, p.107.

Techniques and Tactics
Modern Streamers for Trophy Trout details several methods for catching big trout on streamers. My favourite is pretty simple. I use fast-action rods loaded with full-sinking and sink-tip lines which are rigged with short stiff leaders and large bulky, and cast them to structure. After allowing the fly to sink to the appropriate depth in the water column, I fish the streamer with a jerk-strip retrieve, employing a combination of rod tip movement and 8”-12” hand pulls. This makes the streamer mimic a fleeing batifish or trout that that is trying to escape, but cannot, which, in turn, triggers all three of the instinctive behaviors of big trout (like all alpha predators: aggression, territorial response and hunger.

What I love about this type of active streamer fishing is that it is so visually exciting . You are treated to the sight of huge trout tearing out from cover to slam your offering. Sometimes all you see is a large golden flash behind your fly or a huge toilet flush-like boil in the water where you last saw your streamer. It gets your heart pumping madly and your adrenaline flowing. It’s just as breath-taking as those perfect moments when big trout throw caution out the window and take mayflies off the surface. 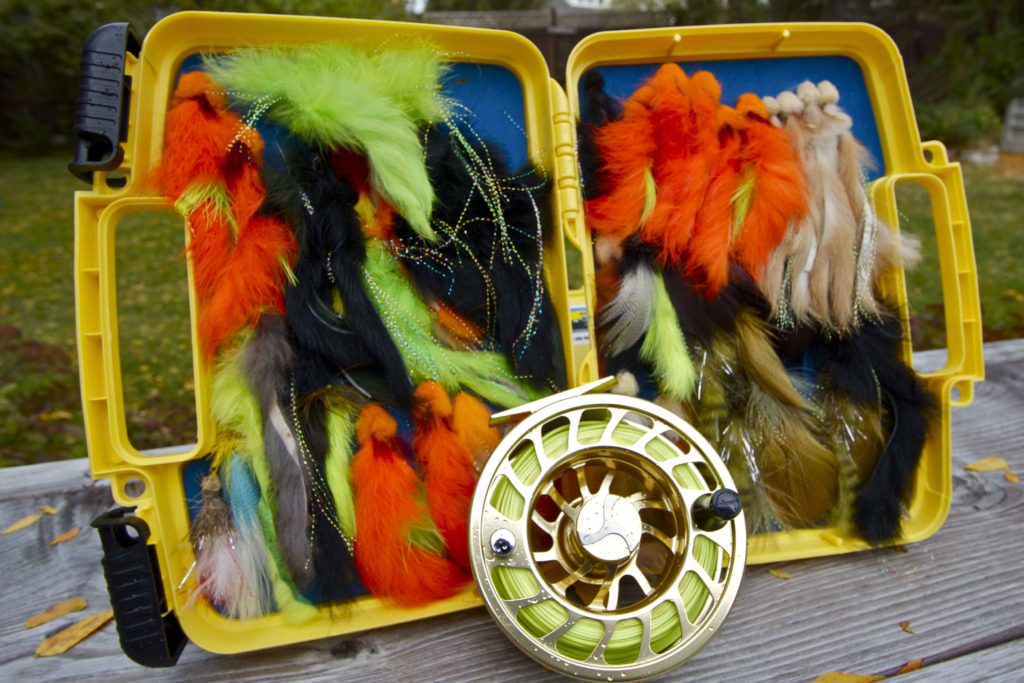 GEAR
Lines
It is amazing how much wrong information there is about streamer fly lines. Even many staff in fly shops and larger retailers possess little knowledge of sinking lines. That is why I like Modern Streamers for Trophy Trout, in which Bob and Kelly clearly spell out what lines you need and why. While it’s true that a floating line can work in some conditions (especially with weighted streamers), generally what is needed is a sinking line.

My favourite line to use in virtually all conditions is a full sinker. These come in different sink rates to match all conditions (sink rate is usually measured in inches per second) and help ensure consistency of depth for your streamer in each. Most lines I choose are rated to sink at 4-5 inches per second, which I have found to be a good general purpose model for both rivers and lakes. However, if you supply yourself with a range of sinking lines, you’ll be best equipped for all conditions.

Fly line labeling can sometimes be confusing, in terms of understanding what the sink rates are. Intermediate Lines, which typically sink at 1.5 to 2 inches per second, are ideal for fishing streamers with weighted heads in one to four feet of water on rivers. These can also be used on lakes, if you count down your line to ensure it is in the right part of the water column.

For full sinking lines, the following specifications from RIO (typical for most manufacturers), provides a very useful guide. Some manufacturers use a designation such as “Type IV” or “Type V” to designate the sink rate. In such cases, check the box the line comes in, or the company website, where there should be information on actual sink rates indicating how many inches per second that the line sinks at.

The best thing about full-sinking lines and this type of fishing is that they eliminate the much of need for false casting. They are also enable very accurate casting and punch through winds with ease. 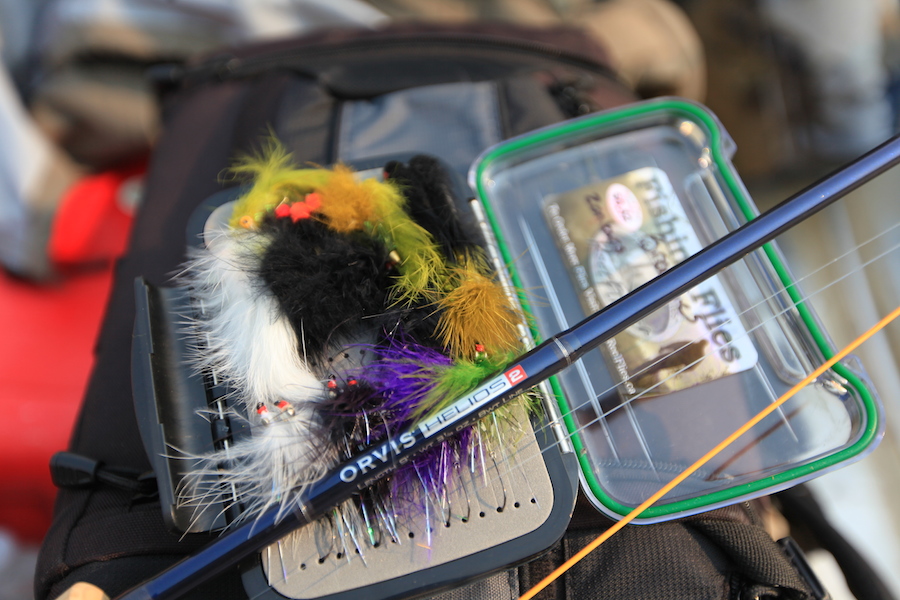 Rods
This type of fishing requires stout , fast-action fly rods, rather than the delicate tip rods designed for dry fly fishing. A dry fly rod just won’t cut delivering a full-sink, sink-tip or express-tip line. You need something which will enable you to cast heavy lines and streamers all day without fatigue. For this, I have found medium-fast to fast-action rods are best.

There are lots of companies that make good fast-action models. These include Orvis Helios, RL Winston Boron III, Sage ZXL. Kelly Galloup has recently teamed up with St. Croix to design a streamer-specific fly rod. The result is a set of superb six and seven weight rods that are designed to execute fast and accurate casts with sinking lines and weighted streamers. Best of all, it is very reasonably priced at approximately $400 (US).

If you’re looking for a streamer rod, if possible, test drive it with a sinking line, or at least a heavy fly. This will allow you to quickly ascertain whether it has the backbone to punch out streamers on sinking lines all day without destroying your arm and shoulder muscles.

Leader Setups
This is where many anglers make a basic mistake in streamer fishing—using a leader which is too long. This certainly applied to me in my early years of fly fishing. When using full-sinking and sink-tip lines, you do not need nine foot tapered leaders. These are totally counter-productive. The leaders you need to use should be stout and short. Usually, I use a 3’ – 4’ piece of 25lb stiff mono (such as Maxima) to which I tie a 2’ piece of 1x or 2x tippet (8-12lb test). The short leader enables ease and accuracy in casting, enables better control the fly, and ensures that the fly is in the right part of the water column. Make sure that you use high quality material for this rig, as big trout really slam into streamers when you use this technique, necessitating that your system be up to the punishing shock they deliver. 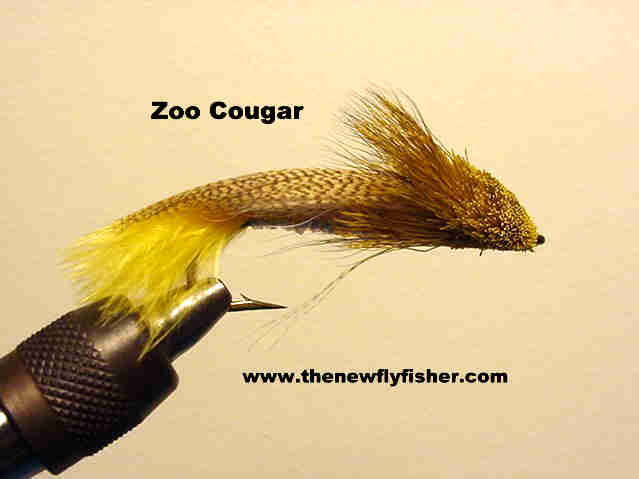 In Modern Streamers for Trophy Trout, Bob and Kelly considerable time and space explaining why patterns are so critical to the success. It’s essential that, in order to be effective, patterns must imitate the silhouettes and actions of the primary forage fish where you’re fishing. In most areas, these will be sculpins, creek chub and smaller trout. Patterns have to match these.

Favourites for Bob and Kelly include the Zoo Cougar, Butt-Monkey, Wounded Cheesey, and Ditch Pig. Yes, unique names, but they’re all proven patterns that really work. My personal favourite is the Zoo Cougar in yellow, olive, black and white, on which I have caught big trout from Wyoming to Alberta and from upstate New York to Labrador. This pattern does it all when combined with the right tackle and techniques. 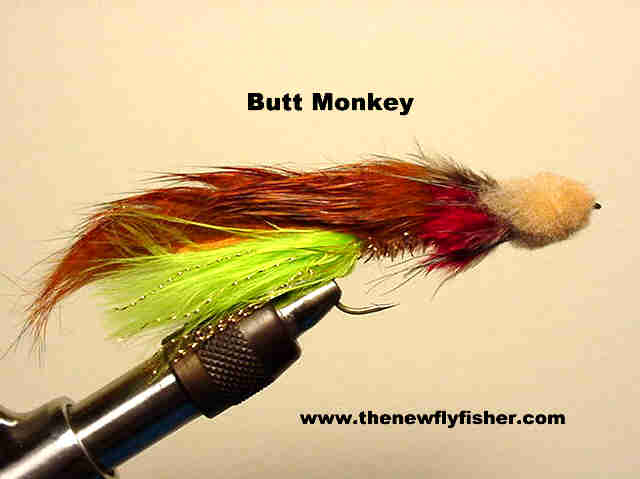 Summary
By all means continue to use the traditional method of swinging silhouette hairwing streamer patterns, but, if you really want to catch big trout, and I mean really big trout , then try the Modern Streamers for Trophy Trout techniques and tactics. There is nothing as exciting as seeing 26” of brown trout slashing at your Zoo Cougar, or watching a monstrous brook trout streak out from behind submerged boulders to attack your Wounded Cheesy.

By making these adaptations to your streamer fishing to these techniques, you, too, will be able to experience incredible moments on your favourite river or lake—moments when the biggest trout around slams your into your streamer with the aggression of a lion taking down a zebra—moments as electrifying and special as encountering the perfect hatch with a dry fly—moments that you will proudly recount to fellow anglers for years to come.