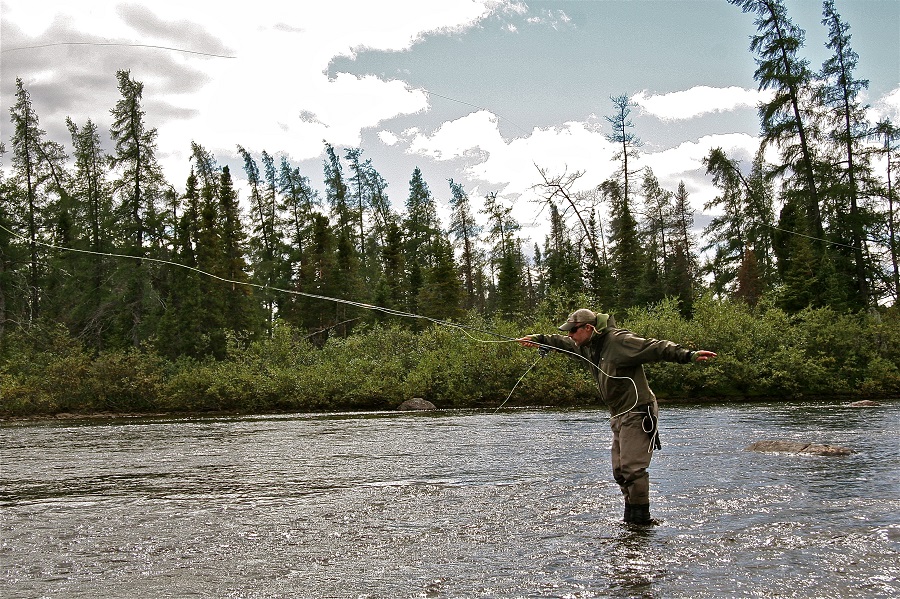 The double haul enables casting incredibly long distances and helps deal with wind more effectively. However, learning it has frustrated many fly fishers, as, initially, it feels as awkward as patting the top of your head while rubbing your stomach in a circle at the same time. Once learned though, you will ask yourself “What was so hard about that?”

I always caution beginning casters not to attempt the double haul until they’ve mastered the casting basics, such as keeping the path of the rod tip in a straight line, making a positive stop, and employing good timing, as well as avoiding any slack in the cast and understanding when to lengthen or shorten the casting stroke. Then and only then should you attempt to add a haul.

Anatomy of the Haul
A haul is a supplementary pull of the line with the line hand, made simultaneously with the casting stroke (either backcast or forecast).

If the pull is done on the frontcast only or on the backcast only, it is called a “single haul”. If two pulls are made, one on the backcast and another on the frontcast, it is called a “double haul”. Hauling has a huge effect on loop control. You can actually control the size of the loop with amount of hauling energy you apply. One caution, though, is that if you haul too soon or too hard, you will cause a tailing loop.  And since loop control is the key to good fly-casting, learning to haul properly is really quite important.

When to Apply the Haul
The haul is applied when the rod is bending under its greatest load, caused by the weight of the line and the movement of the rod during the stroke. The line will pull on the rod during the casting stroke, making it bend (load). When the rod is abruptly stopped at the end of the stroke, the rod will straighten (unload), transferring the energy from the rod load to the line and forming the loop. The energy runs down the line, making it curl over itself until it straightens out, at which point it begins to load the rod again, providing energy for a cast in the opposite direction. If you add a haul to the process, you bend the rod even more, enabling you to cast the line further.

When the double haul is correctly applied, you will feel the rod bend deeper and see the line speed up. When the rod is abruptly stopped at the end of the stroke, you stop pulling on the line. You then move your hand upwards, allowing the line to slide back up through the guides. This what Mel Krieger calls a “down-up motion”. Ken Robins of Stratford Ontario, once told me to think of the haul as a beating of a drum. After beating down on the drum, you raise your hand right to get ready for the next beat. The haul is a similar motion.

When you are ready to present the fly on your final stroke, make your last haul and let go of the line at the end of it. Make sure you hold the rod high on the final stroke, and you will see the line shoot out and through the rod guides.

A common mistake that impedes this entire process is when a caster disrupts the rod’s loading function by overwhelming it with arm strength. This denies the rod the necessary time to load. It is simply casting too hard with the rod hand. The trick is to try and control the cast with the line hand and cast normally with the rod hand. As you practice, you will learn that you don’t have to cast hard with the rod hand. The line hand actually controls the line speed as well as the size of the loops. You will be able to feel how far the rod will bend. Your confidence will grow with practice.

Another common mistake I see occurs when casters are ready to shoot line and think they need to cast that final stroke harder. This will always cause a tailing loop and loss of distance. I tell my students to finish with a longer final stroke, not a harder one.

Executing the Double Haul
1. When you reach the slight wrist bend on your back stroke, begin the power snap—where you pull down on the line with your line hand. 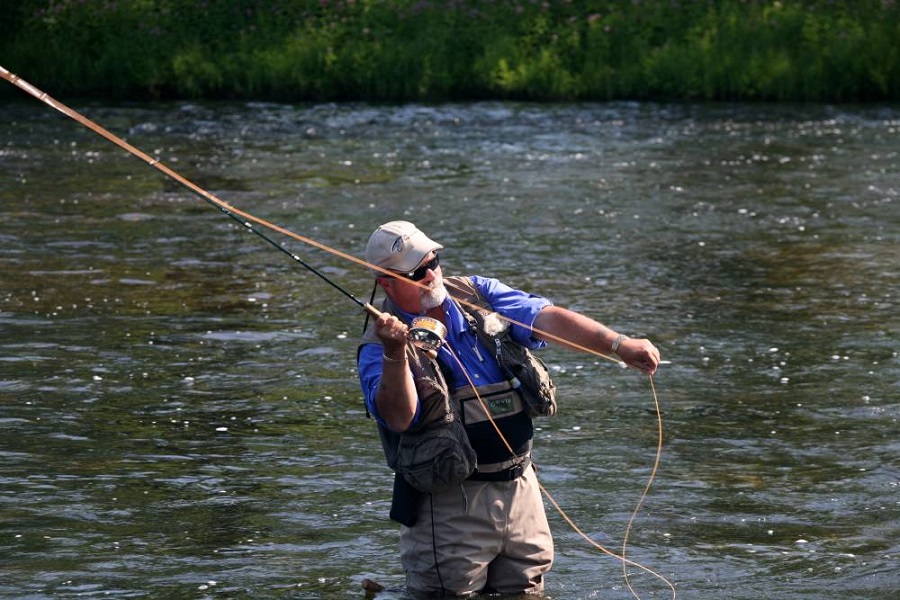 2. End the power snap with an abrupt stop, finishing the haul and allowing the weight and speed of the line to pull it back through the guides, bringing your hands together. 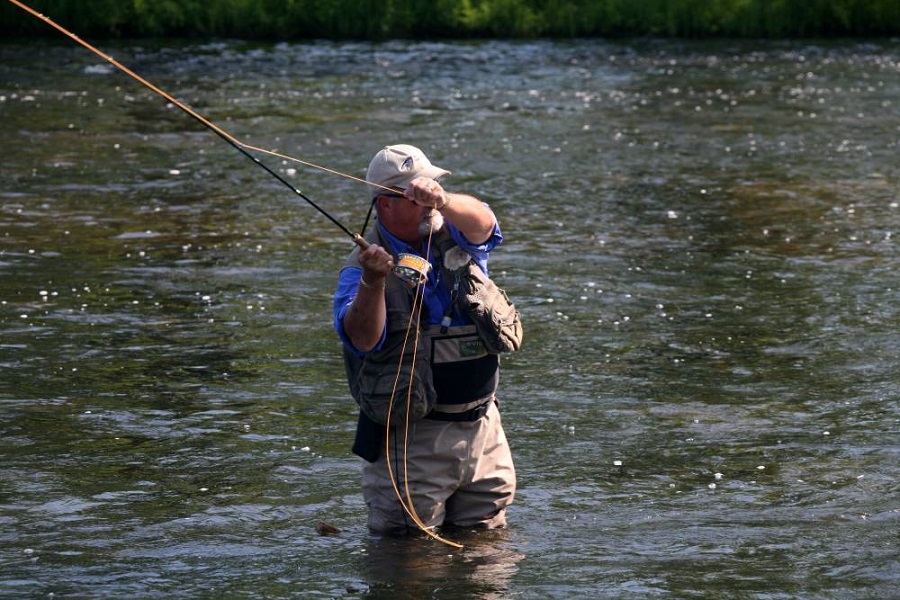 3. With a slight wrist bend, begin your forward power snap. This is where you apply the forward haul. 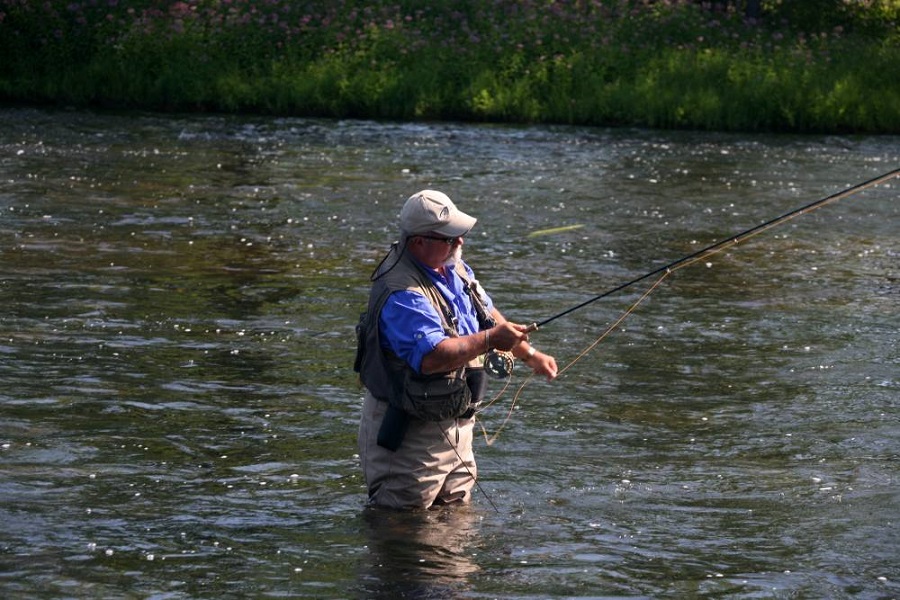 4. The haul continues till the abrupt stop, when you stop it and allow the line to slip through the guides with your hand following. 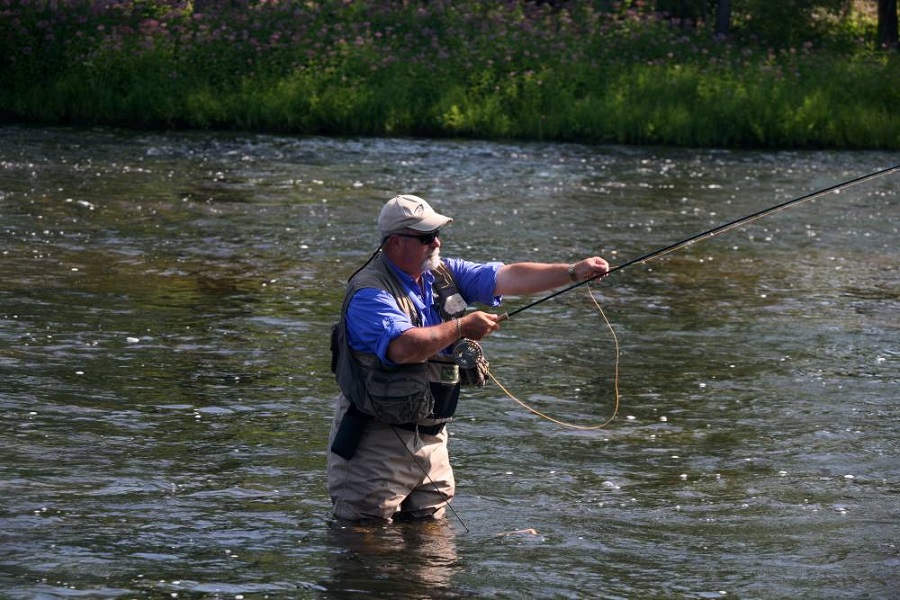 A few things to remember:
1. The length of the haul are directly related to the length of the cast. Simply put the longer the cast the longer the haul.
2.If the haul is done too hard or sharply, the result will be a tailing loop. This is due to improper application of power. The haul must be applied with a gradual acceleration to a sudden stop, the same as the rod hand.
3. Applying the haul greatly increases line speed, thus increasing distance. It also will make it much easier to cope with a head or tail wind.

Practice Tip:
First, lay about 25 feet of line on the grass, then make a single side arm cast.

As you start the cast, the line will drag and the grass will offer some resistance, which will load the rod, enabling you to introduce a short haul.

Once you get the feel of when to apply a proper haul, it will be easier to develop longer and stronger hauls on an overhead cast. Perform one cast at a time, letting the line drop before making a cast in the other direction; it is easier to concentrate on one cast at a time

I know this sound complicated, but it’s really not.

The more you practice, the better you will get. Keep at it and before long you will be hauling and hitting distances that you had previously only dreamed of. 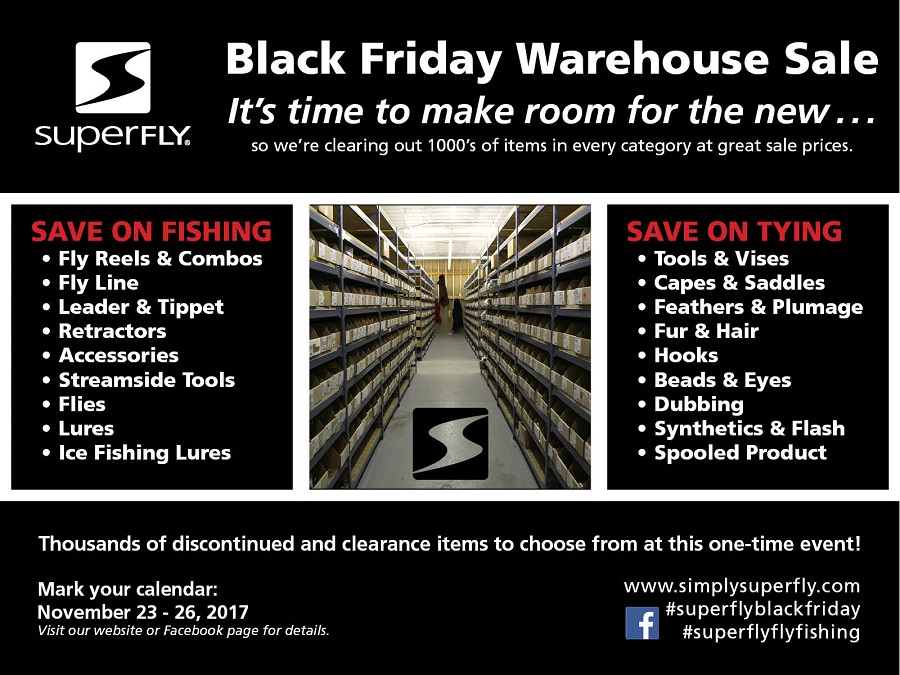